Sadly, our WGSL guild recently lost Bracha Fredman, a guild member from 1970 until about the mid-1990s.  For the past many years she has lived with Alzheimer’s and has been absent from our guild.  She was a gifted weaver with unique talents for complex weaving structures.

Bracha was born in Jerusalem, Israel (known as Palestine at that time) in 1926 and immigrated to the United States in 1941.  She and her family returned to live in Israel for a few years in the late 1940s then again in the early 1960s but settled permanently in St. Louis after 1964, though she returned for frequent visits and was buried in Israel.

She wrote that she “discovered weaving in 1968 after a trip to Mexico, where for the first time she saw people spin and weave.  She fell in love with yarns and weaving and knew instantly that this was for her.”  She had no formal art training but alongside her cousin by marriage, Betty Epstein, she studied with Libbie Crawford and attended workshops in the states and in Finland.

Bracha’s early weaving interests focused in wallhangings.  For many years, she explored weaving multi-layered fabric structures using her 8 harness loom.  She also developed an interest in tapestry but explored a non-traditional method combining it with pattern weaves.

She leaves a legacy of wallhangings, one of which on public display, titled Tallit no.VII, is installed at the Saul Brodsky Jewish Community Library.  The piece is an excellent example of her multi-layered weaving technique.

Memories of Our Members 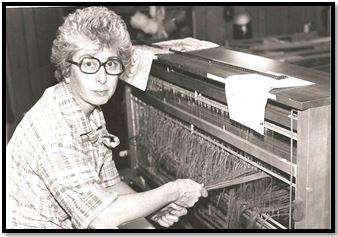