Most of us who know Connie as a weaver are aware that her long association with the Weavers’ Guild of St. Louis began more than 80 years ago, when, as a young student, she joined the Guild, then only 8 years old.​ She and another student attended Guild meetings in their college attire alongside society matrons in their hats and gloves, all sipping tea poured from a silver teapot into china teacups.

Many also know that Connie studied for two years under the expert tutelage of Sara Mattsson at the St. Louis School of Fine Arts at Washington University; that she continued learning throughout the years by taking classes and workshops from widely recognized and well respected names in the history of hand-weaving, including Mary Atwater and Josephine Estes; and that she even traveled to Norway twice to learn new weaving techniques. What many may not know is that Connie also had a professional weaving career as director of the St. Louis Area Weaving Project of the depression-era WPA, and that she supervised the weaving of a blanket for the Missouri Exhibit at the 1939 World’s Fair held in the city of New York.

Connie’s work is as meticulous as her mind was sharp, and she was rightfully proud of it. Her tea towels, with their straight selvages and evenly placed weft threads, were exhibited in recent years at the DAR Headquarters in Washington D.C., and one received a first-place award. Her talent and her pride in art and craftsmanship is manifest in her “1840 Weaver’s Cottage” diorama with its miniature hand-woven textiles, hand-made walnut furniture, and accessories, all scaled down in every dimension. The Weaver’s Cottage holds an entire course in spinning, weaving, and early American history. It is fitting that Connie donated it to the Missouri History Museum to be shared, studied, and admired for years to come.

It is only in the past year or two that Connie could no longer attend Weavers’ Guild meetings in St. Louis. Nevertheless, she lived in her own apartment at the Fountains of Shiloh, traversing its long hallways in her foot-propelled wheelchair, eschewing any help, and complaining only that too few of the other residents shared her interests. She enjoyed time spent with her weaver and knitter friends and had recently taught Janet Brannon to weave and me to knit. She met regularly with her knitters’ group, serving as its “Program Chair” and general motivator. She even had me lined up for the February meeting to show the group how to make folded book ornaments. Many in old age tend to look back. Connie looked ever forward.

Last October, when the knitters’ group celebrated her 103rd birthday, I gave her a tablet-woven etui to hold crochet hooks, needles, scissors and other small tools. She said she would “treasure it forever.” “Forever” arrived far too soon, but I will always treasure my memory of the lady whose talent, wit, and mental acuity continues to amaze and inspire.

​“She was the most amazing woman I ever met.” said Janet Brannon about our fellow weaver, knitter, crocheter, our colleague, our friend, our Connie. Connie Hilgert passed away peacefully in the company of her family on January 25 at the age of 103. Age led her to rely on a walker and then a wheelchair, but until her last hospitalization, not age, nor walker, nor wheelchair stopped her from leading the full, rich, active, and productive life she had known for so long. Always learning, always doing, that was Connie. 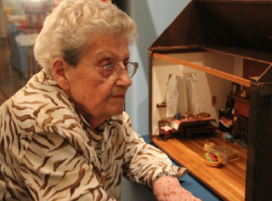