Does This Dress Make My Lungs Look Black?

2015 RECIPIENT of the LUCY PRIMM AWARD FOR FIBER ART 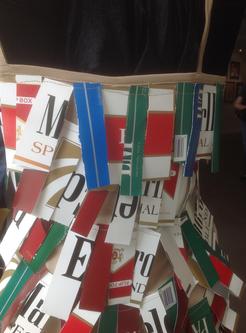 Does This Dress Make My Lungs Look Black? This fiber art creation by Courtney Woolford, received “The Weavers’ Guild of St. Louis Award for Excellence in Fiber Art, given in Memory of Lucy Primm” in the 2015 St. Louis Artists’ Guild, Emerson Young Artists’ Showcase.

Courtney Woolford is a senior at North St. Francois County R-1 High School. She is a student of Mary Hoehn and plans to become an art teacher herself. Courtney stitches her up-cycled creations from discarded paper that might otherwise end up in a landfill; she paints and draws in several media, particularly watercolor, color pencil, and ink; and she writes creatively.

The idea for her award-winning dress stemmed from a conversation she overheard while working at her job at a truck stop. A couple was arguing about money spent on cigarettes and one of them surmised that the money spent on smoking during a person’s lifetime could instead buy a Ferrari. Although the amount that they computed might not buy a new Ferrari, Courtney could imagine a lot of nice dresses and other things that it would buy. So instead of trashing cartons from the cigarettes she sold at the truck stop, she turned them into a dress. The title she chose for her dress also makes a poignant statement about health issues associated with a lifetime of smoking.

Courtney was unsure what she should wear to the gallery for the opening reception of the exhibit. She did not want to wear something trashy, but then asked herself: “Why not wear something made from trash?” Once again she raided the trash at the truck stop, this time retrieving gum and candy wrappers, cupcake boxes and the like, and used her ingenuity to create skirts for herself and a friend who attended the reception with her. Congratulations to Courtney, a creative young person making art with a message, and who hopes to someday mentor young art students herself.