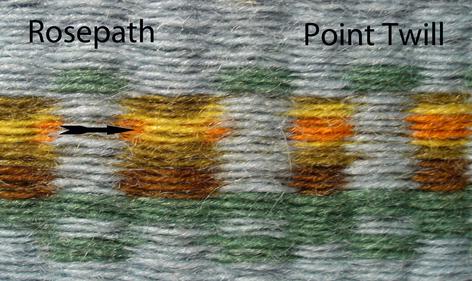 Because, at first glance, I had assumed that the textile had been woven using a balanced 2/2 twill boundweave treadling, I expected the back side to show equally well-defined patterning, though perhaps not recognizable figures. However, when I turned it over, I found that the back side was covered by long floats, some over as many as five warp threads, and that it lacked any pictorial definition. When I looked again, more closely, at the front face, I found that each weft yarn passes over only one warp thread rather than two in twill-like fashion, thus eliminating any overlap of adjacent color blocks. The resulting figures are well-delineated. This confirmed that an unbalanced, “N/1”, treadling had been used, but what is the numerical value of N, and was a boundweave treadling used?

Boundweave is a treadling system that can be used with many threading systems, and, in Scandinavian textiles, it is often paired with rosepath or point twill threadings. The treadling order remains constant throughout, but the colors of the weft yarns can be varied to produce different effects ranging from fussy little figures to dramatic bargello patterns. On a fourshaft loom, four weft yarns in up to four different colors are inserted sequentially into four successive sheds and, when beaten, appear as a single row of weaving. Several repeats of the same four-weft sequence will show as vertical bars of color on the surface of the weaving. The width and arrangement of the vertical bars will vary depending on the number and order of colors used in a given four-weft sequence. 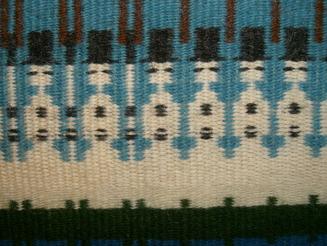 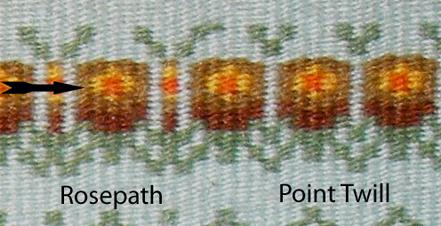 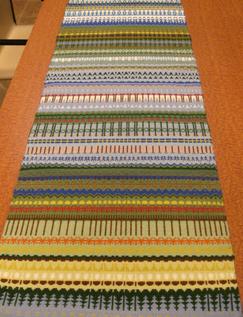 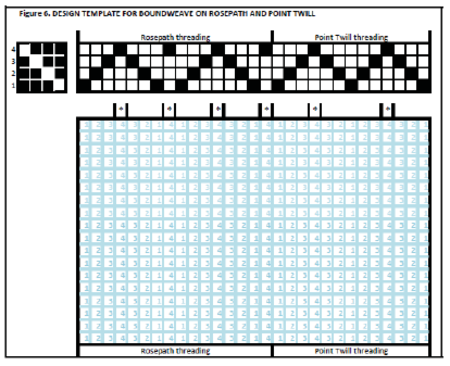 Design template to make your own snowmen. A downloadable/printable form can be found using the below button 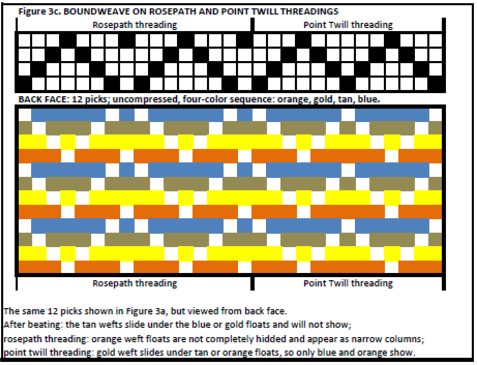 Down The Primm Rosepath

When Lucy Primm first showed me the lovely Swedish weaving pictured in Figure 1, I was charmed by its wide variety of intricate figures forming row upon row of snowmen, trees, flowers, butterflies, etc. My off-the-cuff, first guess as to how it had been woven was “boundweave on rosepath”, a treadling method and threading pattern resulting in a loomcontrolled, weft-faced structure that I had explored longago. I tacitly assumed that a balanced 2/2 twill boundweave treadling had been used, but thought that perhaps more than four shafts had been required to produce the crisp, well-defined figures. However, further examination showed that I had, to some extent, been led down a primrose path by my own incomplete knowledge. Eventually, I put two plus two together and came up with three plus one, which still makes four.

Figure 4a and Figure 4b show the pattern of bars which results when using three and two colors, respectively. Figure 5 represents 32 picks of weft compressed into eight rows of weaving, and shows how the compressed drawdowns from the previous figures can be combined to give a larger part of the motif in Figure 3b. Figure 6 gives a template for designing your own motifs. Care to try the snowmen?

Fig 3b. Photo of motifs from Swedish Weaving

A computer weaving program might have helped, but I do not own one, so I resorted to old-fashioned approaches, such as searching for visual clues, and counting warp thread  and weft picks. One of the more obvious features about the textile is that there are two slightly different versions of each motif, indicating two different threading patterns. An example is shown in the photo in Figure 2, where the snowmen on the left are flanked by white-and-black vertical rods that are identical to the column of weaving at the center of each snowman figure. On the right, there are no such flanking rods. The motif on the left repeats every eight warp threads, whereas that on the right repeats every six warp threads. These features are consistent with a traditional rosepath threading on the left and a point twill threading on the right. At least, I was half correct about the threading. What about the weaving? 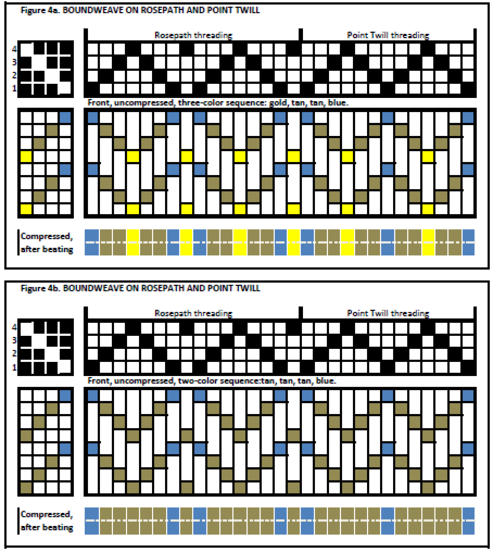 The same three repeats of the same four-color, four-weft sequence are shown in the drafts of Figure 3c for the back side of the textile. The uncompressed drawdown illustrates why some colors are not visible on the back surface as well as why its appearance is so nebulous. The photo in Figure 3d shows the back side of the actual textile with its long floats and ill-defined pattern, and the arrow at the left points to these same 12 weft picks.