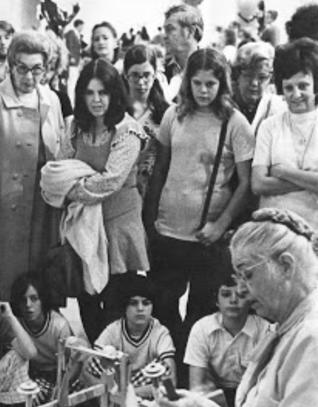 This award pays tribute to a former member of the Guild who was also an award-winning spinner.

Elsie Bell was an active spinner and spinning teacher who considered imagination and innovation as important as technical expertise. Before joining the Weavers’ Guild of St. Louis in 1967, Elsie led an interesting life following her husband to remote places, and had spent many years in South America. Over the years, Elsie presented several programs about her travels and experiences, including “Weaving in Peru”, “World Craft Conference in Lima”, and “Highland Ecuador”. A new generation of spinners interested in recycling and green yarns might wish to travel back in time to 1978, when Elsie gave a mini-workshop on creative spinning, including plying, shredding and using old yarns to create new ones.​