A long-time Weavers’ Guild member, passed away recently at age 96. Helen’s 59-year association with the Guild followed the usual path required at that time in the Guild’s history. She came to several meetings as a visitor before joining as an associate member, and, a few months later, she became an active member through the jury process. She was one of the early leaders who helped the Guild recover from its post WWII slump when membership and attendance at meetings had dwindled. She served as president from 1956- 1958, and also on numerous committees throughout the years. She was very involved in the workings and activities of the Guild, and always strove to maintain the high artistic and technical standards set by the founders. 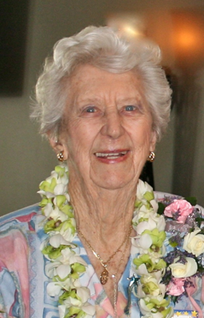 Until about 10 years ago, when her hearing and eyesight began to falter, Helen actively participated in programs, workshops, fashion shows, study groups, and the annual Guild sale. In the late 1950s, she took part in two small-loom teaching and learning projects coordinated by the Guild. Small looms, threaded in either rosepath or crackle, were passed among members who varied treadlings, weft materials, and palette to produce a wide variety of samples. These samples were then mounted and assembled into exhibits that traveled to other guilds around the country. At the annual holiday fashion shows of years past, Helen modeled her stylish and well crafted garments with her usual elegance and grace. Janita Loder, a long-time member of the Tapestry Study Group, summed up Helen’s influence on that group: “Her presence at the tapestry meetings inspired all the members with her expertise, creativity, and faithfulness to the group and whatever task we had embarked upon.” In 2010, Helen was honored by the Guild for her contributions and service.

Helen was also active in regional and national organizations of craftspersons, including American Craftman's Council and Missouri Craftman's Conference. She had works in exhibits in St. Louis and beyond and won three ribbons at the International Show of the Women's Institute in New York in 1957.

Helen maintained her interest and membership in the Guild throughout the 59 years since her first visit in 1952. In September of this year, she, along with two of her grandchildren, attended the opening of the Guild’s 85th Anniversary exhibit, Woven in Time, at the Missouri History Museum, and the potluck that followed. Although Helen had become quite frail, her granddaughter said that the family never doubted that Helen would attend that day. Later, they treated her to a private awards ceremony complete with red carpet and formal attire. Recently, family members and friends gathered to celebrate her long and productive life in the midst of photographs of her life events, her weavings, art objects collected on her travels, and even a plate of special cookies. It was obvious to everyone who attended that she was admired, loved, and cherished. We will all miss her.