Although, Lillian’s obituary describes the WGSL members as “society matrons” (and some, no doubt, were), the weavings created by Lillian and her students attest to their artistic as well as their technical competence. Their work far surpassed craft, and elevated handweaving into the realm of art. Lillian’s obituary does not actually say that she was a painter; it says only that “Her first ambition was to become a painter …”. It is not known whether she painted any pictures in oil or water color after her school years, but it is certain that she “painted” exquisite pictures in fiber at her loom. One can only wonder how far her influence might have reached and what direction weaving in St. Louis might have taken had she not met such an untimely death. 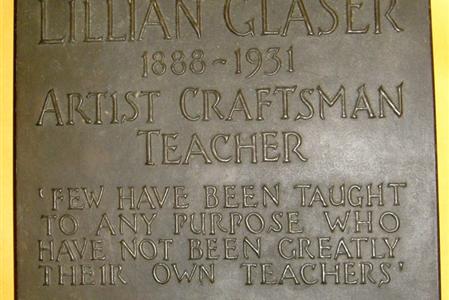 All accounts of the WGSL’s history agree that the weaving class was launched in 1917, and the 40th and 75th Anniversary histories further state that the inaugural weaving course was taught by Lillian Glaser. The first mention of an official weaving class did, indeed, appear under the heading, “Courses of Instruction in the School of Fine Arts” in the 1917 Bulletin of Washington University. However, Miss Cordelia Taylor Baker, not Miss Glaser, is listed as the instructor. Lillian was a student in the class. Nevertheless, weaving instruction had been offered through the Crafts Shop for several years before that. The Crafts Shop was appropriately equipped to provide students at the school the “opportunity of becoming familiar with certain practical work in connection with metal, fabrics, textiles, leather, clay…” At that time specialization in the crafts was considered a serious artistic endeavor, and courses in design, color, and drawing were required prerequisites.12

Lillian was also involved in extracurricular activities. While still a student she, along with five other women, performed in the Dance of Anitra at the Art Students Bal Masque.13 Later, while she was the school’s librarian, she designed costumes for a cast of 300 students performing in the School of Fine Arts pageant “The Choice of Osiris”.14

That Lillian eventually became the weaving instructor is well documented. She was officially appointed Instructor in the School of Fine Arts for the 1919-1920 academic year, and was listed in the bulletin15 and the yearbook16 as an instructor in both the Crafts Shop and the Weaving course. She also served as librarian during that year. Her name appears in the faculty section of each annual Directory of Faculty and Students from 1920 through 1931, where she is listed as Instructor of Weaving and either Leather (1920-22) or Basketry (1922-31). The faculty meeting logs for those years show that Lillian’s students often received honors marks, and that many of those honorees, e.g., Mrs. Rowse, Mrs. Cowan, Mrs. Harris, and Mrs. Wuerpel, were among the guild’s early members.

Director Wuerpel valued her highly. He requested an increase in her salary each year, and by 1930 she ranked among the highly paid instructors in the art school. In a letter to Chancellor Throop in March 1929, Director Wuerpel surmised that the reason for the low registration in the weaving class that semester was the expense of the materials. He cautioned that it would be “unwise to discontinue the class because the instructor is doing other work to justify retention.” In 1930, he requested an 11% increase in her salary for the next year, and said that he doubted that he could replace her for considerably more than that.17

Lillian never stopped learning. During a leave of absence in 1925-1926, she studied at the National Academy of Design, the Art Students’ League of New York, and with Edward Worst.18 In the late 1920s, she also spent several summers in Europe studying weaving and other handicrafts. At the time of her death in May 1931, Lillian had recently begun teaching batik. The batik class was first offered in the early 1920s and was taught by Miss June Butler until the late 1920s when Lillian took over. It is likely that Lillian saw batik as a more appropriate medium for her painterly style than either leather or basketry. One of her batik students and one of her weaving students received honors marks for their work just one week before she would be asphyxiated when a “pan of dye, for dyeing linen in batik making… boiled over and extinguished a gas flame”.19

A teacher who is constantly learning is truly inspiring. Lillian’s students returned to her classes year after year, and they formed a guild (possibly while she was on leave of absence), which grew from a small nucleus to more than 35 members in just five years.

Facts are often unintentionally distorted when passed from generation to generation, and history can be changed by a casual statement or a careless stroke of the pen. The history of the Weavers’ Guild of Saint Louis (WGSL) is no exception. Written versions 1,2,3 appear to have been stitched together from earlier ones, along with articles from newspapers and magazines, and personal recollections, sometimes condensing, sometimes expanding, sometimes embellishing, and in the process sometimes inadvertently altering their actuality.

Legends about Lillian Glaser and her legacy also abound. Most WGSL members know that the organization sprouted from a weaving class at Washington University taught by Lillian. Many are aware that she died tragically of asphyxiation late one night in her dye studio after a heated dye pot boiled over and extinguished the gas flame while she slept. Over the years, a few have even thought that she single-handedly founded the WGSL.

One version of the WGSL’s history3 avers that in 1917, Edmund Wuerpel, Director of the St. Louis School of Fine Arts at Washington University, added a weaving class to the curriculum and asked “painter Lillian Glaser” to teach it. That statement is puzzling. Why would the Director of an art school at a university ask a painter to teach weaving, no matter how talented a painter she might have been, unless she also had weaving expertise? Of course, she did become an expert weaver, as is evidenced by extant examples of her work done in the mid- to late-1920s, but little is ever stated about her early training and experience. When did she learn to weave and from whom? Was she actually a painter or had she just studied painting before focusing on weaving? For more information on these and other questions, I turned to the Washington University Archives, Department of Special Collections, Washington University Libraries (WUA). I consulted University Catalogues, Bulletins, Directories of Faculty and Students, the Hatchet (yearbook), department budgets, student rosters, handwritten faculty meeting logs, correspondence, scrapbooks, scraps of paper, etc. I have also obtained information about her family and early life from an historian who now lives in the house where Lillian was born.

Lillian was born on April 22, 1888 in Belleville, IL, and moved with her parents to Missouri, when she was a child. She came from a scholarly, literary family. Her grandparents, Frederick and Mathilda Glaser, were German immigrants, who, along with other such German immigrants, settled in the Shiloh Valley area of Illinois to take up farming. Being educated professionals, they were dubbed “Latin farmers”. Frederick was an early subscriber to the German Library Association, predecessor of the Belleville Public Library. Lillian’s father, Adolph, although a business man, had a life-long interest in philosophy and literature, and a “love of all things beautiful”. His love and appreciation for art and beauty must have influenced her greatly.4

Lillian first enrolled at the St. Louis School of Fine Arts at Washington University in the fall of 19105 at the age of 22. It is not known how she spent the previous few years after high school. Perhaps she had attended a local college; perhaps she worked to earn enough for her expenses at Washington University. Clues concerning Lillian’s course of study at the university can be found in the WUA School of Fine Arts collection, which includes monthly faculty meeting logs6 listing the names of students who received honors marks during the previous month. Yearbooks and other university publications also often list the names of students who received special year-end honors and awards. During her first semester Lillian took a standard repertoire of first-year art classes and received several honors marks in Drawing from the Antique, Sketching, and Water Color Painting. However, she received no honors marks after January 1911, and no year-end awards in June 1911. It was almost as if she had vanished into thin air. Her name does not appear on student rosters for the next two academic years.

Lillian returned as a regular full-time student in 1913-1914 and 1914-1915, and received year-end awards for both years. In June 1914, she was awarded the prestigious Wayman Crow Medal (prestige only; no real medal to keep) and Scholarship for “excellence of work in all classes”,7 and in June 1915, an honorable mention.8 Unfortunately, the faculty meeting logs for 1912-17 are missing, so no information is available about any individual courses she took or honors marks she received. Wayman Crow Medal recipients from other years pursued classical fine art studies, such as drawing, painting, design, etc., and I surmise that Lillian did as well.

In the years between 1915 and 1920, Lillian held paid positions at the school and took classes in craft-related areas, both likely part-time. Director Wuerpel requested $540 in 1915-16, and $735 in 1918-19, for her salary (positions unspecified), and $720 in 1919-20 for her salary as librarian.9 In 1916-1917 and 1917-1918 she was enrolled only as a Saturday afternoon student. In the years between 1916 and 1920, she concentrated her studies in the crafts area. She received several honors marks in Weaving, Modeling (i.e., sculpture), Bookbinding, and Leather, as well as year-end awards of an honorable mention for “craft work”, a bronze medal “For the excellence of her work in Leather and Weaving”,10 and a certificate for “satisfactory completion” of her work in leather.11 Of course, she may have taken other courses as well; the sources cited mention only those students who received honors for their work. Her name appears in the student (as well as faculty listings) listings in both the 1920-21 yearbook and the Directory of Faculty and Students. However, I found nothing that would indicate she took any classes that year. 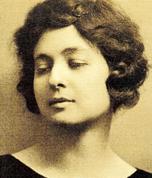