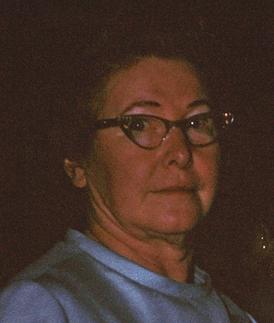 Libbie Crawford was a professional weaver and teacher of weaving. She was a graduate of the University of Oklahoma and was introduced to weaving at a rug store in Boone, North Carolina where she had stopped to buy a rug, discovered that the shop was a weaving school, and returned for weaving instructions. She subsequently studied with Rupert Peters at the Penland School of Handcrafts, with Elizabeth Lord at Berea College, as well as with others too numerous to mention in Sweden and the United States. She taught at Berea College, many places in the St. Louis area, and in her own studio in Kirkwood, MO.

Libbie was a founding member of the Midwest Weavers’ Conference and for many years served on the Board of Directors of the Handweavers’ Guild of America and as its Missouri state representative. She joined the Weavers’ Guild of St. Louis in the early 1950s and loved all types of yarns, especially green ones, and weaving and weavers until her death in 1983.

​The Libbie Crawford Award for Loom-Controlled Hand-weaving was created in 1985.