This award pays tribute to a former member of the Guild who was not only an accomplished and productive weaver, but who was also a mentor to young fiber artists.

Ever modest, she never touted her accomplishments, but her mentoring, weaving advice, wit, charm, and sense of humor will be long remembered and appreciated, especially by the once neophyte weavers who benefitted from her acumen. 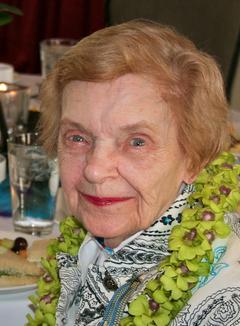 Lucy Primm was an avid and active weaver and a Lifetime Honorary Member of the Weavers’ Guild of St. Louis. In the 50 years that she was a member of the Guild, she was involved in various activities on many levels. When she learned that some with day jobs could not attend the meetings, which were then held on Tuesday mornings, she organized a group that met in the evening and served as its president for a decade. In 2011, just months before she passed away, she organized a Swedish Weaving Study Group that is still active and growing. For many years, she operated her own business, The Weavery, selling Scandinavian weaving yarns that were then not readily available locally or online.