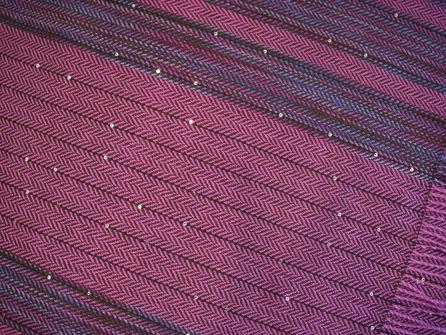 Rita Hagenbruch
2015 RECIPIENT of the LIBBIE CRAWFORD AWARD for HANDWEAVING

Rita’s award-winning shawl was woven using tencel yarn leftover from two shawls she had woven previously. The colors worked so well with each other and with the draft she chose, a twill used in many a Swedish towel, that Rita’s shawl, embellished with sequins attached using S. Charles thread from Italy, stood out at the Members’ Exhibit as much as it had at that extra special black tie dinner.

In addition to her “ADA Black Tie Dinner Shawl”, Rita has woven many other shawls and ruanas, mostly for dentists and their spouses. Her husband Joseph, a dentist, has served as trustee of the American Dental Association and regent for the American College of Dentists. When Rita attends professional meetings with him, she wears her handwovens and returns home with commissions from other attendees.

Rita wrote “I was so amazed to win the Libbie Crawford Award for my shawl and surprised to hear she was from the St. Louis area. My husband graduated from Washington University Dental School. I worked at Jewish hospital when he was in school and we commuted from Collinsville, IL. We were newlyweds then and lived in my husband’s grandparents' house. I have fond memories of St. Louis… Thank you so much for the award.” 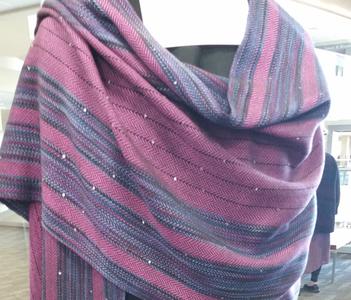