​In May 1930, Minnie Clay Wuerpel, president of the Weavers’ Guild of St. Louis (WGSL) and her husband, Edmund Wuerpel, Director of the St. Louis School of Fine Arts at Washington University visited the Cleveland Museum of Art while the May Show was in progress. There, they saw two prize-winning tapestries, “The Flight into Egypt” and “St. George and the Dragon”, woven by Sara Mattsson, a young Swedish weaver who was in Cleveland for a year-long visit with her sister, also a weaver. Sara’s work must have made a great impression on the Wuerpels, because just a year later Director Wuerpel went to great lengths to hire her to head the weaving program at Washington University.(1,2) 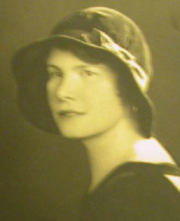 A weaving program had been established at Washington University in 1917, and had been taught for more than 10 years by Lillian Glaser, one of the original members of the WGSL.(3) In 1930, when the Wuerpels first viewed Sara’s work, the weaving program was not large enough to support two instructors. The Wuerpels soon returned to St. Louis, but they did not forget Sara, and Sara returned to Sweden, but she did not forget the U. S. In 1931, an event, albeit a tragic one, opened the possibility for Sara’s return on a permanent basis. Lillian Glaser was asphyxiated, apparently while napping, by gas from an extinguished flame in the dye studio.(4)  After Lillian’s untimely death, Director Wuerpel set the wheels in motion to secure Sara’s services. This was no mean feat, because by that time Sara had returned to Sweden, and in 1931, in the midst of the great depression, it was next to impossible for foreigners to be granted work visas.

Director Wuerpel went to work almost immediately to find an artistically and technically competent person to head the weaving program. In a letter, dated May 20, 1931, Director Wuerpel wrote to Chancellor Throop, “The work in weaving has made such an impression on the interests in the country that I feel it would be a great mistake for us to think of doing anything less than we have been doing heretofore. This means that I shall have to secure an instructor who has exceptional merit and it may take some time to find such a person and I shall go about it slowly in order that I make no mistake.” Although Director Wuerpel did not mention any names in that letter, he must have had Sara in mind, and perhaps had already contacted her. He had traveled widely and would have been well aware that it might take several few months to make all the necessary arrangements. He did not want the weaving program to languish, so he bought himself a year of extra wiggle room by proposing that his wife be hired to teach weaving during the 1931-1932 academic year. Mrs. Wuerpel was an expert weaver, who had studied with Lillian Glaser for almost 10 years. He suggested a moderate salary for his wife, but he emphasized that a permanent weaving instructor with the qualifications he sought would have to be highly compensated. The proposed teaching arrangement met with Chancellor Throop’s approval, but no additional funds were made available.(5) I suspect that Director Wuerpel did not consider other candidates. He even sent his wife to Stockholm, where Sara was teaching at the time, to verify that Sara was uniquely qualified for the position. An article about Sara written in 1960, reported that the American Ambassador “was instrumental in having a bill passed by Congress granting her visa”,(2)  although an inquiry to the National Archives yielded no record that such a bill had ever been passed. Whatever the Wuerpels did, it worked. Sara was formally appointed as “Instructor in Weaving” for the year 1931-1932, after Mrs. Wuerpel tendered her resignation, both effective July 1, 1931.(5)

​
Sara was appointed for one year “with the understanding that in case both she and the University were satisfied her reappointment for the position would follow at the end of the year.” Her starting salary was in the upper range of faculty salaries at that time--just 15% less than the maximum earned by only a few long-time faculty members. Because Chancellor Throop had not granted any additional funds, Director Wuerpel had to find room in his existing budget to pay both Sara and an additional part-time instructor for the batik class. It was Director Wuerpel’s practice to pay a new hire less during their first year than during their second, and he did request an increase in her salary for 1932-1933. Had it not been for the depression, she would almost certainly have been given the raise. However, no increases were given in 1932-1933, and all salaries, including Sara’s, were cut by 10% in 1933-1934.(5)

Director Wuerpel would have been hard-pressed to find a more highly qualified candidate than Sara. Her mother was a seamstress for Sweden’s royal family and a weaver(6), her three older sisters were also skilled in the needle arts and in weaving, and young Sara had followed suit. Her formal training in the fiber arts began at the age of four when her mother enrolled her in an embroidery school. In grammar school, she was taught to make bobbin lace by a private tutor who made weekly visits to her family’s home, and beginning at age 14, she studied weaving in school. She studied French embroidery at a French school before attending Hulda Lundinoch Handarbetes Vanners Hogre Slojd Semenarium in Sweden where she obtained her diploma in domestic arts and weaving.(7)  Sara was not only well versed in the many loom-controlled techniques used for weaving traditional linens, draperies, garments, but she had also mastered many weaver-controlled techniques, including traditional Swedish tapestry, pictorial rya, pick-up double weave, and dukagäng. These she skillfully used in creating her art weavings.(8)

Sara arrived in St. Louis in the fall of 1931, with a trunk full of weavings, books, and fibers, and taught weaving classes at Washington University for the next five years. Her excellent training and 10 years of teaching experience served both her and her students well. Constance Curtiss Hilgert, one of Sara’s students and a long-time member of the WGSL, described Sara’s teaching strategy. New students learned to weave on looms that were already set up with a neutral linen warp and a simple threading, such as rosepath. They were required to weave a length of fabric having straight selvages and an even beat before they were allowed to weave anything more complex and interesting, or even learn to read a weaving draft or warp a loom. Only after they had mastered those basic, technical skills, were they allowed to venture into more complex and artistic areas such as overshot weave and tapestry. Sara had brought several Swedish-language weaving books with her; but only two books in English were available: one by E.F. Worst and one by Mary Atwater. However, this was not an insurmountable obstacle, because weaving drafts are graphical and their language is universal. Once the students understood weaving drafts, they could use books in both languages.

Sara readily adapted to her new surroundings. She served on faculty committees, and her students regularly earned honors marks for work presented at monthly faculty meetings.(9) She organized a dance group that performed traditional Swedish dances in native costume. Several of her students, namely, Jeanne Woerheide (later Simpson, then Hencke), Eva White (later Wilson), and Connie Curtiss (later Hilgert), all long-time WGSL members, became her life-long friends. Sara also developed a close friendship with the Barnes family, particularly with one daughter Clara, who worked as art librarian at Washington University. Clara and two of her sisters, Susan and Sally, were also members of the WGSL in the 1930s.(10)

Sara spent her summer vacations teaching weaving in San Francisco, where one of her sisters lived, or in Cleveland, where she met her future husband, Sture Anliot. In 1936, she and Sture were married in Jeanne Woerheide’s home near the Washington University campus, and then moved to Cleveland.(10) Sara continued her productive weaving career, teaching, traveling abroad to learn new techniques, exhibiting her work, and giving lectures and workshops all over the country. She often returned to St. Louis, sometimes to give workshops and sometimes just to visit her friends.(2,7) In 1971, Sara was awarded Sweden’s highest decoration, the Order of Vasa, First Class for her achievements as teacher, artist, and citizen. Her father and a sister had previously received the honor as well.(11)

Recently, I visited Sara's daughter, Mary Anliot Hertzman, in the Cincinnati area. She graciously showed me many of Sara’s weavings and allowed me to touch, feel, examine and photograph them. Although Mary does not have either of the pieces that captured the Wuerpels’ hearts in 1930, she does have others based on the “Flight into Egypt” and the “St. George and the Dragon” themes. Particularly striking as well as somewhat frightening are two pieces depicting St. George and the Dragon (see photos). One is executed in pick-up double weave using only two colors (black and tan), and the other in pictorial rya using just three colors (red, black and gray). Although the sparse use of color and the highly stylized figures limit dimensionality, the scene is dramatic and full of movement. St. George has the upper hand. His extended arm is massive and powerful, yet its outline flows gracefully into his shoulder and down his body. Although one foot restrains the dragon’s body, the dragon’s tail is still free to thrash about and its mouth is open ready to strike. St. George’s poised spear completes the composition, but will he complete the thrust to accomplish his task before the dragon escapes from under his foot?

Sara’s wide range of technical versatility is further illustrated in two other art weavings. Both are early pieces as evidenced by her signatures, “M” and interlaced “SM” (see photos). “Knight Approaching a Castle”, executed in traditional Swedish tapestry, depicts a knight urging his horse on toward a castle. Although the figures are stylized, the scene is both dimensional and dynamic: birds are flying above, clouds are gathering beyond, and the horse and dog are confronting (or are they welcoming?) each other along the path receding into the castle. “Fish Swimming Among Sea Flowers” is executed in dukagäng technique using subdued blue, green and orange tones. The stalk curves gracefully along the diagonal from bottom right to top left, its branches reaching toward the swimming fish as if to caress them. The simplicity of the composition, the subtle color changes, and the stylized figures all portray a sense of tranquility.

Most of Sara’s saga presented here took place during the early 1930s when she taught at Washington University. However, I would be remiss if I did not mention her later works, many of which incorporate multiple techniques and materials in a single piece, often with whimsy and humor. One tapestry employs traditional tapestry, rya knots, and stitchery, and shows three small girls running up a stairway in a park-like setting. It is whimsical, yet it retains a definite traditional Swedish folk art component, and the viewer can almost hear the squeals of the children as they race to the top. Another shows a dance concert as viewed by an invisible concert-goer. The backs of the heads of the audience members seated in the first two rows are formed from bits of fur. The dancers on the stage, though stylized, are graceful, elegant, and lively.

Although I was overwhelmed by the number and variety of tapestries and other art pieces I saw that day, Mary assured me that it was only the tip of the iceberg because Sara was “driven to weave”. Mary and her brothers were often enlisted to make warps and dress looms while Sara wove.(12) Sara’s long weaving career continued well into her eighties, and her vast output included linens, draperies, garments, etc. in addition to art pieces. Many of her weavings had been sold and others had been given to her friends and family. One article said that she had 22 looms(1) and I believe that she must have kept all of them going at once.