A long-time member and past president of the Weavers' Guild of St. Louis, passed away a few months ago after a long illness. During her thirty-some years as a member, she also served on committees, participated in the sale, and was instrumental in organizing a tapestry study group, which met at her apartment building after she no longer ventured far from home. Zella was a versatile weaver whose repertoire included yardage, talaysim (prayer shawls), and tapestries. Her creations, whether garments from her own handwoven fabrics, fiber art for the wall, or tiny doll-house rugs, were beautifully designed as well as meticulously executed and finished. 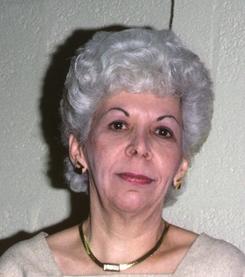 ​ Zella was a native St. Louisan, and it was in her neighborhood near Union and Delmar that she learned the basics of the arts that would come to define her. As a young child she was taken under the wing of a neighbor, an expert with embroidery hoop, needle, and thread, who taught her many of the stitches that would embellish her work throughout her lifetime. Zella excelled in drawing at Soldan High School and graduated just as the country was entering into World War II. Those were difficult times and dreams were only dreams, so she worked as a typist until she was able to pursue her passion for art in New York. The two years she spent there were exciting and memorable for her as she studied fashion design and illustration at the Traphagen School of Fashion while supporting herself by “painting” blouses with brush and threaded needle. She often reminisced about her wonderful experiences of living at the 92nd St. Y and of soaking up culture at nearby museums, theaters, and opera houses.

After completing her studies, Zella returned to St. Louis in the early 1950s, married, and became a full-time wife and mother. While her three children were growing up, she focused her creative energies on more practical, but nevertheless artistic, activities such as designing and sewing dance costumes for her daughter and clothing for herself. She often admired fiber art in local galleries as well as tapestries and Judaica woven by Muriel Nezhnie, so onceher family obligations lessened, she learned to weave. The rest is history and, fortunately for us, a part of our Guild’s history.

Zella joined the Guild in the early 1970s and participated in numerous Guild activities classes, and workshops. When her back and knees began to give out, Zella traded her traditional floor loom for a computerized loom, one of the first in St. Louis, and when she could no longer weave comfortably on that, she directed her efforts toward tapestry. She found tapestry weaving highly satisfying, not just because it was less physically demanding, but because it allowed her to combine her life-long passions—drawing and fiber.

Zella felt that there should be an emotional involvement between artists and their subjects, as exemplified by the keepsake portraits that she wove of three of her grandchildren, and by the torah mantles and silk talaysim which she created and which now envelop scrolls in the US, Israel, and Norway, and worshipers across the country. Of special meaning to me...to me is a small tapestry that she gave to me several years ago. It was inspired by a calligraphy exhibit that she visited in Florida and depicts an artist’s representation of the Chinese character, nian, often used to express feelings of cherished and loving friendships.

In addition to the Parkinson’s disease that had already dampened her spirits and abilities, Zella suffered a seizure which caused her to spend the last year of her life in an extended care facility. Her former strength and her inclination to weave or even sketch never returned after that catastrophic event, but her cognitive abilities did. During our frequent visits she told me many times that she was glad to be alive, that she was not in pain, and that she was thankful to have her daughter and son-in-law close by. We would reminisce and share fond memories of our long friendship along with our views of the world as we had done for so long. I always tried to bring something related to art or weaving to keep her mind active. I often sought her advice about my latest projects, and she always provided excellent suggestions for choosing colors, improving the design, and correcting flaws. Her artistic sense never wavered.

She derived a great deal of joy and pride from having her work included in the Guild’s 85th Anniversary Exhibit, especially because it was in a museum setting. She was also thrilled to have her garments in the retro-fashion show, also at the Missouri History Museum, and to see them up close when I later modeled them in her room. As a longtime resident of University City, Zella was particularly pleased to know that the Bookmark tapestries she interpreted in fiber from Christel Maassen’s designs had been expertly mounted, thanks to Deann Rubin, and installed in the University City Library.

After suffering another seizure last spring, she slept more and interacted less, but she reached the end of her journey knowing that she had caring family and friends, and that her work was admired and respected.
Marilyn Emerson Holtzer